FDNY Firefighter James Lee Jr.
On Wednesday Night, Sept 5th, 2018 at 1900 hours (Box Sandwich Dinner at 1800 hours) a very special presentation will be held at the Performing Arts Center at the Bucks County Community College, being arranged through the Bucks County Fire Chiefs and Firefighters Association. The guest for the evening will be Jim Lee, Jr.
(Reserve Your Tickets By Aug 29th)

Jim Lee, Jr., grew up in the fire service, starting with the Willow Grove Fire Co. in 1989, and also worked at Second Alarmers Rescue Squad and Ambler Ambulance. He then went on from a live-in firefighter while going to college in Prince George’s County, Maryland, to a full-time position with the Washington, D.C. Fire, and eventually to his dream job with the FDNY. He worked hard and trained hard his entire career. Before too long, Jim found himself assigned to the best of the best—Special Operations Command working at Rescue 1 in Manhattan. Jim was very recently promoted to lieutenant and is now the father of three young children. In October, 2016, Jim made a heroic rope rescue off of the roof of a 5-story multiple dwelling on fire in Manhattan. https://www.firefighternation.com/articles/2016/10/dramatic-roof-rope-rescue-at-manhattan-fire.html

Jim will talk about how he trained/prepared for and worked with other FDNY members to perform the rescue. He will also talk about his start in the fire service and how he got to work with the best of the best. There will be areas of interest in his presentation for all, from the newest firefighters to the most seasoned veterans. We hope that there will be some time at the conclusion for questions from the audience. The cost will be $10 per person, paid in advance, with all proceeds benefiting the Bucks County Fire Chiefs & Firefighters Assn Scholarship Fund. Open to all that are interested

“We all train to be heroes, come listen to the man who is the definition of the word” 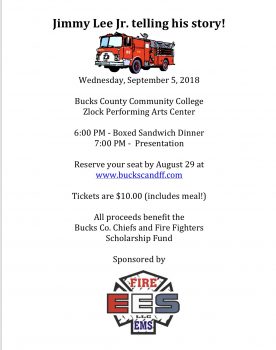 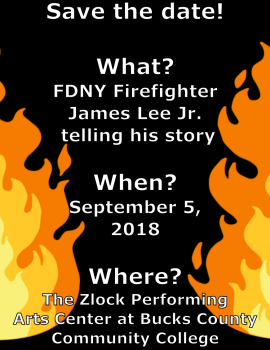 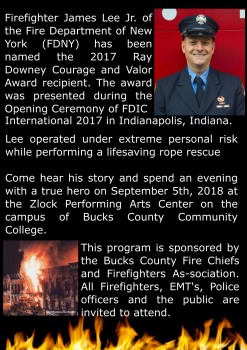